Strategic Factory Honored as one of SmartCEO’s Future 50 Companies 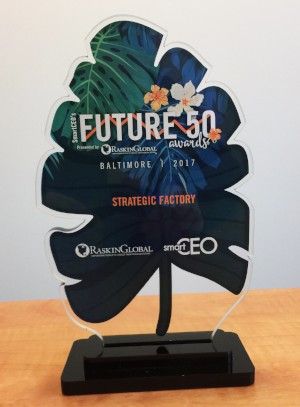 Baltimore, MD (Jan. 27, 2017) — Baltimore SmartCEO honored the 2017 Future 50 Award winners at a Hawaii-themed awards celebration on January 19, 2017 at the Hunt Valley Inn. The Future 50 Awards program is the largest and most anticipated SmartCEO awards program of the year. This program recognizes 50 of the region’s fastest growing, mid-sized companies along with 10 Emerging Growth companies.

The winners, chosen based on a three-year average of employee and revenue growth, are listed alphabetically, not ranked. The 2017 Future 50 winners collectively generate more than $800 million in annual revenue and employ 7,604 individuals in the Greater Baltimore area.

“It’s an honor to be inducted into this elite group for the second straight year. Our continued growth and expansion is a direct result of our commitment to quality products and our ‘Can Do. Will Do. Happy To!’ culture,” said Keith Miller, President and CEO of Strategic Factory.

Since opening its doors in January of 2015, Strategic Factory has increased its workforce by more than 20 percent and has continued to add new equipment and technology. Miller plans to break ground on a 30,000 square-foot expansion building later this year.

“These passionate and driven entrepreneurs embody the true definition of leadership. We honor them for their unwavering commitment to building their businesses, shaping our communities and making our region a better place to work and live,” said Jaime Nespor-Zawmon, President of SmartCEO.

Nearly 400 attended this year’s black-tie-optional awards gala at the Hunt Valley Inn to celebrate the winners and their achievements. The Hawaii-themed event kicked off with a cocktail reception and high-energy networking, followed by a video-packed awards ceremony and seated dinner. The evening and celebration culminated with dessert and additional networking.