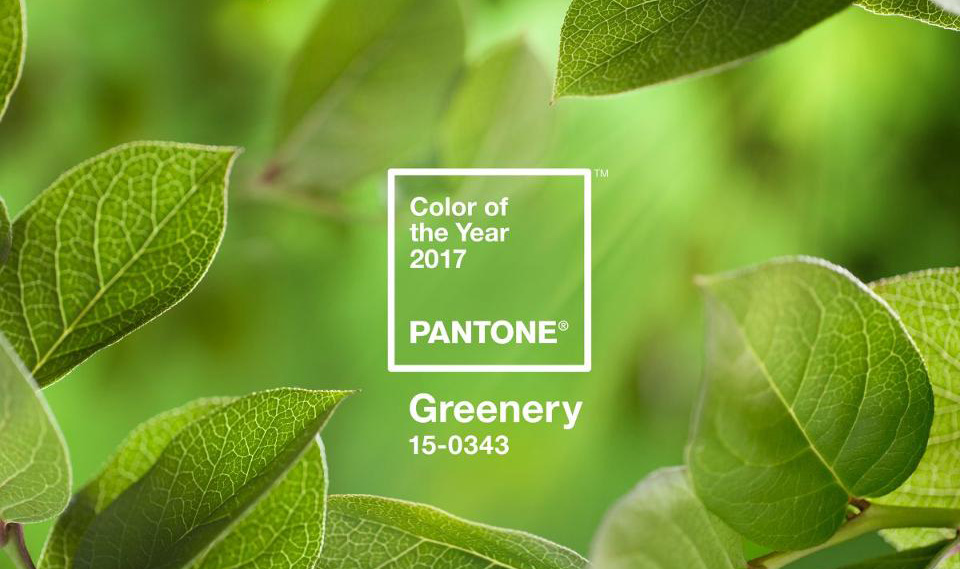 How Does Pantone Choose its Color of the Year?

Pantone, the company that calls itself “the global authority on color,” unveiled its 2017 Color of the Year earlier this month. Pantone 15-0343, otherwise known as “Greenery”, a “yellow-green shade that evokes the first days of spring,” was chosen as the color to represent the New Year.

The pick came as a surprise to many, which makes you wonder how Pantone even comes up with a yearly color (in 2016, they shocked the world by picking TWO colors for the first time ever – Rose Quartz (light pink) and Serenity (baby blue).

So just how does one company choose a single color over millions of others?

Pantone has crowned a Color of the Year since 2000, and claims that the colors they choose, in essence, choose themselves.

What started off as an “afterthought” that was discussed between a few individuals in the fourth quarter of the year has transformed into a 20-person team – the Pantone Color Institute – that begins global research early in the spring, looking for recurring patterns or colors in daily life situations. The process now takes nearly nine months.

Pantone states that the Color of the Year is actually “…a color snapshot of what we see taking place in our global culture that serves as an expression of a mood and an attitude.”

For instance, last year’s colors were meant to inspire gender equality, and were said to be “welcoming colors that fulfill our yearning for reassurance and security.”

An article in AdAge quotes Ron Potesky, senior VP and general manager at Pantone, explaining how and why two colors were chosen in 2016: “These colors were seen together almost like two sides of a coin – they were showing up in many different places together.” 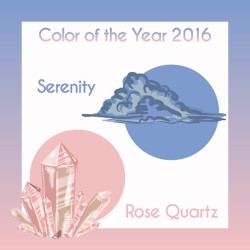 It wasn’t until the 1980s, when we were able to tell the sex of a child while still in the womb, that the gender roles associated with blue and pink were truly reversed (at least in the U.S.).

Pantone’s choice of Greenery for 2017 stems from the turmoil and stress felt worldwide in 2016. From terrorism to natural disasters to politics, 2016 had a little bit of everything.

The color green is synonymous with spring, a time of rebirth. 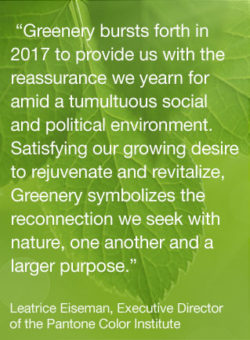 In a New York Times article, Leatrice Eiseman, executive director of the Pantone Color Institute, spoke on the color choice for 2017: “This is the color of hopefulness, and of our connection to nature. It speaks to what we call the ‘re’ words: regenerate, refresh, revitalize, renew. Every spring we enter a new cycle and new shoots come from the ground. It is something life-affirming to look forward to.”

An article in Forbes gives another explanation from Laurie Pressman, the Pantone Color Institute’s vice president: “There’s a growing desire to reconnect with Nature and what is real, and find ways to disconnect from technology. We need a break. We need to stop and breath.”

There are some who liken the Color of the Year selection to the age-old question, “Which came first, the chicken or the egg?” While there are many companies that wait until Pantone announces the winning hue before launching products, the truth seems to be that the team at Pantone has been observing these colors in real life around the world for quite some time beforehand.

The same New York Times article mentions the team first started seeing hints of green as early as 2014, and the instances have grown in number since then. Leaf green was seen on runways, in offices, in makeup and even on a new Mercedes (click the link, scroll down and take a look…that car is gorgeous!). 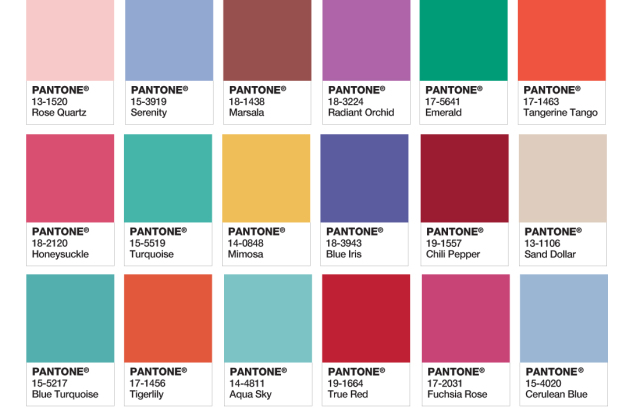 AdAge: “Though it’s hard to say which comes first, the Color of the Year designation or the hue’s appearance across all categories of retail, it’s safe to say that by the end of the year, many consumers are buying the hue.”

I’ll second that notion. If you’re reading this, and want to get me into that Mercedes, just leave a comment! And if you need assistance with what color will complement your brand best, give our team of experts a call.

Need help choosing the right color for your next project?