March Madness comes to an end tonight, and while it’s been acceptable to be a couch potato in front of the tube watching basketball for the past month, it’s time to get back out there and put on your networking hat. Networking is a great way to build your personal brand and bring in more revenue to your business. What better time to get back out there than National Networking Week, which starts today.

Networking the traditional way
Get ready to juggle a plate of appetizers and a drink while exchanging handshakes; you’re off to a networking event. There are several formal networking events throughout the community where the sole purpose is to meet new people and find new business. Check with the Chamber of Commerce for a list of business networking opportunities. There are also professional business networking groups that you can be asked to join if there isn’t a member from your industry.

Networking the casual way
Some people may freeze at the thought of small talk with complete strangers in a traditional networking environment. Think about the hobbies you enjoy and get involved. Maybe it’s a golf league or a bowling team. Take a cooking class or act in a play. Volunteer for a nonprofit organization whose mission you support. There’s nothing like a group of people working toward a common goal that gives you a foundation for a business relationship.

Networking the online way
Maybe you want to stay in that La-Z-Boy a while longer. With social media today you don’t even have to leave the comfort of your home to network. Set up a profile on LinkedIn and join groups of interest. Start answering questions posed in the groups and soon you’ll be an expert people will call on for your services. Depending on your business, Facebook may also prove fruitful to find contacts. Make sure you sell your services subtly.

As an added bonus, it’s National Beer Day on April 7. Often cocktails and networking go hand in hand, so you can celebrate the end of prohibition while honoring National Networking Week. 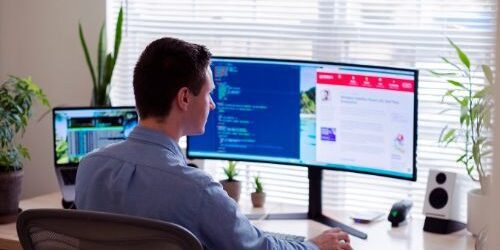 5 Ways to Network in a Virtual World

5 Reasons Your Business Should Sponsor an Event How to Use Humor to be a Better Leader
Top